It’s been a little while, but i’m back!

May was a really busy month for me with work and a house moved thrown into the mix. So you guessed it there was a lack of golf being played….

I did play Aberdovey and Royal St Davids this month though as part of the Top 5 courses in Wales, I will be reviewing all courses and they will all go up together once i’ve completed the tour.

Just to make myself clear, my ball striking is the best it has ever been. My swing feels in control and my distances have increased (this was not a deliberate effort I was making, some of it is due to the weather the rest is down to my improved swing)

Here you can see some of the evidence over the last 5 rounds on fairways in regulation: 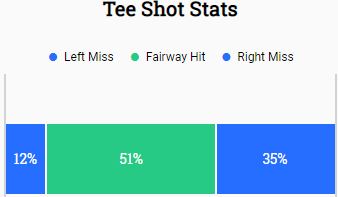 That’s an increase of 8% compared to my season average and is an area of my game I’ve worked on as i tend to loose a lot of balls of the tee. 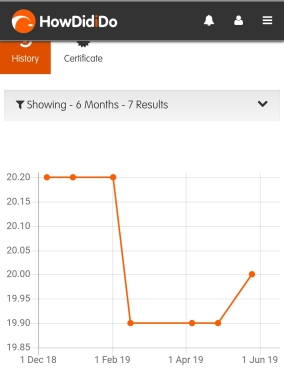 For some reason I can not pull a whole round together, something always lets me know. Hence the handicap going back up. Ok its not much, it’s .1. However there is something physiological about playing off of 19.9 and not 20. Yes i know my playing handicap is the same, but its just frustrating to go up. Especially with the handicap goal of 16.5 to play for.

I have to admit, I have not been putting much work into practice and the only time i’ve really played golf has been in competitions. So there is no surprise that it’s had a negative impact on my handicap.

This has resulted in me changing my approach so for the month of June, I’m not going to compete in any club competitions, instead I’m going to play a round on a Sunday instead to take off a bit of pressure to play well and if I don’t play well I’m not going to get punished.

Yes there are some of you reading this thinking it’s a cop out, perhaps it is. However the plan is to reduce my handicap and consistently play to it. Realistically i’m not playing enough golf or putting enough practice in to get there.

So moving forward my schedule for golf is going to look like this:

6th or 13th July I will enter one of the club competitions again, to put the theory into practice subject to the results through the month.

I have to admit I thought reducing my handicap down to 16.5 this year was going to be a bit easier than it is. Something has been holding me back, I feel as if it’s a lack of practice which ultimately it’s a lack of my effort or respect for the game.. I truly thought play more golf and you just get better, how wrong was i!

Finally to throw a spanner in the works, i’m currently looking for a new golf club…. All will be explained in the next post in a couple of weeks!

Anyway until next time, Happy Golfing.

British Golfer on a journey into the sport whilst juggling family and work life. Attempting to improve and inspire others to play, while having some fun along the way. View all posts by Rookie Golfer