Following on from part one, I’ve managed to get 15 rounds in whilst using the Shot Scope. I’ll start the blog by saying it has now become an integral part of my golf game. I’ll attempt to explain why and the features of the ShotScope that have led to this.

With a decent number of rounds done, the ShotScope has had the chance to work out my ‘playing averages’. The watch and dashboard presents yardages in the form of average, Playing Average and Longest.

Average takes all shots good and bad into consideration, whilst Playing Average attempts to take out the poor shots and those range mammoth shots to give you a realistic average when you’re playing well.

I’ve made reference before about knowing your game and club distances for me is critical aspect of this. The ShotScope v2 has taken any guess work out of the equation. See how the ShotScope Dashboard presents yardage information.

You have two ways of viewing post round data via a computer or phone. The app offers concise data but does not go into that much detail compared to the desktop dashboard.  This is all relative as not everyone is a data geek, and I have to admit as much as I like data when I 1st started using the desktop dashboard it was mind blowing!

I do notice that the phone app is a little inconstant, it does not always show up to date club data. I’ve used two drivers with the ShotScope and its does not always show the data for the current driver I play with… A little frustrating at times as the App shows a great snap shot.

The data you generate whilst on course come under the following categories:

I must admit it’s very easy to focus on the distance of each club, but when the information is gathered and presented back and you really start to use this to your advantage. It begins to point you in the right area to work on.

For example, i do suffer from poor tee shots so this i an area i worked on. The stats to the left are of my last 5 rounds. Compare this to my last 15 round on the left, that’s a 5% increase in fairways hit! The online dashboard goes a step further than this and shows percentage of Birdie, Par, Bogey and Double Bogey from where your tee shot ends up. Obviously my score success is higher when on the fairway. My par success went from 27.1% when a tee shot makes the fairway to 34.5% that coincides from just a 5% improvement in fairways hit! MIC DROP HERE!

I told you about my disappointment of being 12 shots off on my 1st round with the ShotScope . I am happy to say that this is much better now, it’s not always spot on but it’s within a couple of shots and not a dozen shots!

The only difference I’ve made is that I now take 2 or 3 practice swings as it does ask you to do this to help with the algorithm used to track shots.

I told you I’ve got 15 rounds under my belt whilst using the ShotScope, that’s a little bit of a lie. For me to clarify I’ve played 15 rounds using the GPS and Track Mode which allows you to gather all the data I’ve talked about. I’ve also played a few Texas Scramble matches, this format does not lend it self to trying to track your data as you not always hitting you own previous shot. So I’ve used the watch in GPS mode only. No surprise it performs well!

Have I shown why it’s an integral part of my game yet? Just in case I haven’t I throw this into the mix. So I began using the ShotScope back in September.. When I started I was on a handicap of 23 as of 30th October  I’ve bee playing off of 20! That’s a 3 shot cut! Yes a little bit of this is my golfing ability improving; however what the ShotScope has allowed me to do the following better:

Not only because the watch is a GPS device giving me distances to front, middle and back of the green as well distances to front and back of hazards. On top of this I have my only distances calculated for me, so depending on how I am playing and striking the ball I have more information than I did before using the ShotScope. Therefore this has led to me making better decisions during my rounds!

Not only do I get to walk around smug after the data confirms that the great tee shot I hit was on the upper end of my averages and right up the middle! It points me in the right direction for where I need to work… I’ve always thought I was a poor putter but in fact I’m better than I thought! Only slightly, but my success rate between 0ft and 5ft is 72.5%  that’s not bad…

Where I let myself down is on my short game, leaving myself on average 25 foot 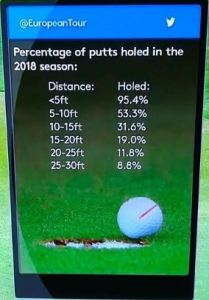 to the pin! So I’ve been working on this area. Not to hole more putts from this distance as even the pro’s struggle (See the European Tour stats to the right). So I’m working on short game to get me in closer. Do you get where i’m going with this, the data is pushing me towards the areas i need it work on. It is down to the user to interrupt that correctly and take the right course of action.

I will have to admit there is still a bit of data I’m getting use to and I am probably not getting the most out of it through lack of understanding. The team are ShotScope are great and approachable so I’ve recently got in touch to clarify some areas.

This is a product i would recommend to anyone that is looking to improve, or just  wants to find out more about their game.

So there you have it another Rookie Review! So until next time….

British Golfer on a journey into the sport whilst juggling family and work life. Attempting to improve and inspire others to play, while having some fun along the way. View all posts by Rookie Golfer